Consistent with his commitment to radically change America– Obama has his eyes on an even bolder goal: to force the sun to shine at night. 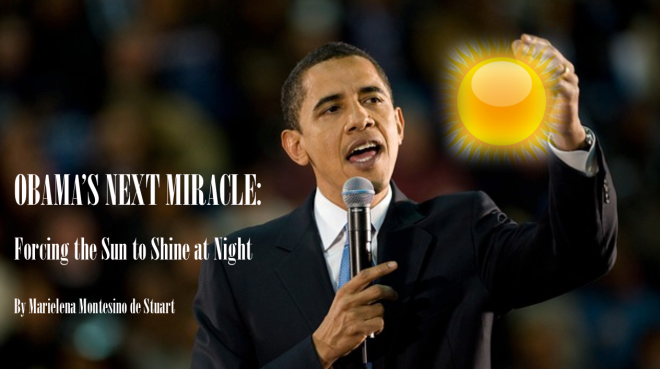 You see, Obama is determined to destroy the coal industry by replacing it with solar and wind power. So, in order to make solar and wind energy efficient and reliable Obama is determined to force the sun to shine at night. A kind of Arctic and Antarctic Summer Solstice phenomenon, if you will, that Obama will bring about right here in America under his “Yes We Can” slogan.

“Obama to Unveil Tougher Environmental Plan With His Legacy in Mind”

In the strongest action ever taken in the United States to combat climate change, President Obama will unveil on Monday a set of environmental regulations devised to sharply cut planet-warming greenhouse gas emissions from the nation’s power plants and ultimately transform America’s electricity industry.

The rules are the final, tougher versions of proposed regulations that the Environmental Protection Agency announced in 2012 and 2014. If they withstand the expected legal challenges, the regulations will set in motion sweeping policy changes that could shut down hundreds of coal-fired power plants, freeze construction of new coal plants and create a boom in the production of wind and solar power and other renewable energy sources.

Coal is what helped build this nation. It has been and remains the least expensive and reliable source of energy. Without coal, the Industrial Revolution would not have taken place– and the United States could not have been developed at such an incredible pace. Beyond reliability and affordability, coal is also the source of employment for millions. This includes those employed in the coal derivatives industry– another evidence of the robust need for coal around the world, including energy-hungry China and India.

Obama is clueless about coal

Obama is a good socialist– as such, he is an enemy of coal through his climate change program– which is part of an international development agenda with a relentless attack on the coal industry.

Like so many of these socialist campaigns (such as homosexual “marriage” as a human right, abortion as “social justice and healthcare for women”)– the campaign against coal seeks to pressure companies to consider the “immorality” of those who oppose this pernicious agenda against coal.

Obama ignores the fact that coal allows for excellent storage and development of systems that provide clean drinking water, food and medicine storage, manufacturing of clothing, as well as national and international transportation. The world’s consumption of coal has increased exponentially– almost as much as oil and gas combined– and much more than all forms of renewable energy. But none of these stubborn facts seem to matter to Obama– who is determined to turn America into the new land of the midnight sun.