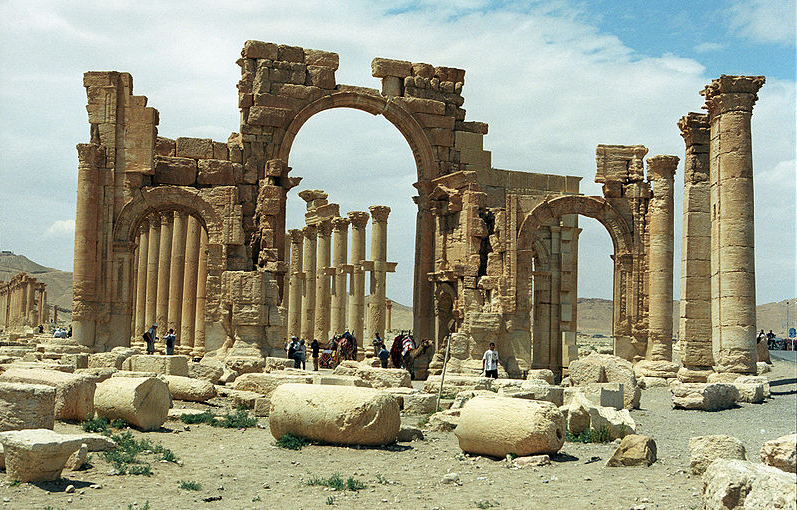 Does UNESCO have a pro-Islamic agenda?  Let’s examine the events in Palmyra and the Roman Catholic Cathedral of Córdoba, Spain.

Who needs UNESCO? — which stands for United Nations Educational, Scientific and Cultural Organization.

The recent beheading of Khaled al-Asaad, a renowned antiquities scholar in Syria is yet another heartbreaking loss of an innocent life taken by ISIS. Khaled al-Asaad had devoted his life to the preservation of Palmyra, in Syria. His brutal execution, while trying to protect precious antiquities, was followed by the news of the destruction of this ancient archeological site, at the hands of ISIS jihadists.

What is also disturbing is that archeological locations like Palmyra, known as the ‘Venice of the Sands’– have been declared World Heritage Sites by UNESCO– one of the many international organizations that are part of the United Nations. But where are the folks at UNESCO when you need them?

UNESCO is supposed to help operate and oversee the protection of its World Heritage Sites, pursuant to a document titled, Operational Guidelines for the Implementation of the World Heritage Convention. This document outlines all the steps required for the operational status and protection of these sites. But UNESCO,  like most socialist programs run by the United Nations, failed to protect Palmyra, one of its most treasured sites.  So much for its “World Heritage Convention.”

The Roman Catholic Cathedral of Córdoba

This brings me to another site, which is in danger of being turned into a “shared space” for Islamic prayer: the Cathedral of Córdoba, Spain. This treasure of Christianity is another World Heritage Site which is struggling to retain its Roman Catholic authenticity and sacred value.

In fact, in the UNESCO’s World Heritage List, the Cathedral of Córdoba is listed as the “Mosque of Córdoba.”  See item 22 under Spain (Historic Center of Córdoba) and in “Notes.”  This is because UNESCO refuses to acknowledge that the original site was a Roman Catholic Church which was desecrated and usurped by the Moors, and turned into a Mosque during their occupation of Spain.

Which brings us to the main question: does UNESCO have a pro-Islamic agenda? Hmm…

I am also including below an article about the history of the Cathedral of Córdoba, for the benefit of my readers.

Personally, I don’t see the purpose of  turning a nation’s historic site into a UNESCO “World Heritage” site– when UNESCO and the United Nations are unable to protect them with their “peacekeeping” forces– nor through any measures taken by the farcical United Nations Security Council– which currently includes non-permanent members such as Venezuela— and in the past even Cuba! There isn’t a rogue state in this world that the United Nations and its minions haven’t embraced.

While ISIS plowed through the Syrian desert– brutally murdering innocent people and destroying everything in sight, the UNESCO World Heritage Committee was holding a session in Bonn in July of this year, where they issued the following charming Bonn Declaration— which I’m sure ISIS jihadists are respectfully perusing!

It is my opinion that UNESCO is speaking out of both sides of its mouth. On one hand it is issuing “declarations” condemning what ISIS is doing in the name of Islam— but on the other hand they are refusing to acknowledge the true Roman Catholic identity of the Cathedral of Córdoba, by calling it the “Mosque of Córdoba.”

There is an ancient Chinese proverb that says, “if we don’t change our direction, we’re likely to end up where we’re headed.” We are heading straight into hell, and without strong moral leadership in Washington not only will more innocent people die– but the world’s cultural patrimony will disappear along with Western Civilization— while politically correct / socialist entities like the United Nations UNESCO gather in their well-appointed boardrooms issuing declarations.

Khaled al-Asaad died alone, beheaded. His body was hung upside down from a column. He died in Palmyra protecting the antiquities that he loved– but where was UNESCO?

Please read my commentary  (published during Holy Week 2014) about the Roman Catholic Cathedral of Córdoba– and the danger it faces of becoming a “shared space” for Islamic prayer.